The workshop stressed the necessity of adopting the service press, the use of various media forms and not relying only on official sources and re-publishing it. This would require training journalists to possess different and modern skills.

Furthermore, Balousha considered that the Palestinian media were nothing but duplications of the Ministry of Health and official institutions’ statements without serious research regarding the information provided. Palestinian media was satisfied with a superficial level of awareness, criticism based mostly on political division, and comparison between the performance of the Palestinian Authority in the West Bank, and the de facto authority in the Gaza Strip.

Emotions occupied a large area in the Palestinian media discourse, Balousha said, whether on the official, national, or even the public and private media level.

The specialized service media was not clearly present during the pandemic, and the media and community organizations’ dialogue did not rise to a level that could be a major source of information, which would help the authorities to reassure citizens, he added.

He explained that the official discourse was divided into two parts. The first promoted the activities of official institutions with emotional speeches and in the context of public relations. The second relied upon a kind of awareness-raising method, which was mainly dependent on international and private institutions.

The official speech was different due to the political and geographic division, and the difference began when the politicians disagreed about President Mahmoud Abbas’s decision to declare a state of emergency at the beginning of March, which negatively affected the media discourse of the two opposing parties, and created a contradiction in awareness among the general public, Balousha continued.

The official media did not address awareness issues for the poor or marginalized groups on how to protect themselves from the virus. The media plan and official announcements were published in main populated areas only.

There was an opportunity for the media to regain the public’s confidence during the pandemic due to the overwhelming spread of fake news, Balousha stated. However, political disagreement, and marginalizing others’ work in dealing with the crisis at had restricted the media from covering the issue professionally. The lack of funding has also been an important factor in affecting the performance of national civil society organization before and during the crisis. Therefore, their role was limited to disseminate awareness information, keeping its employees at home working remotely, while some institutions were forced to stop employees from working, as a result of funding deficit.

The people, according to Balousha, relied mainly on Facebook and other social media platforms, which contained a high number of fabricated news. This burdened the government, private agencies, and the media to verify information and materials published on various websites, especially in the absence of a major transparent source of information.

During the workshop, Balousha considered that the failure of official agencies to rely on transparency, and the thirst of the public for information, gave social media platforms an important space to influence the public and their behavior. Some official and civil society institutions tried to refute some of the false information, but to no avail despite the denial.

Amjad Al-Shawa, PNGO director, opened the workshop by referring to the difficult repercussions emerged by the pandemic on various aspects, including economy, health, social and psychological life.

Media discourse is of high value, Al-Shawa continued and pointed out while referring to the speech of the official authority, factional, experts, and the international institutions as well, especially the World Health Organization which played a critical role in issuing health directives and guidelines, as well as mobilizing, and financing pandemic response plans.

Media discourse created confusion amongst Palestinians, especially in the Gaza Strip, which suffers from the catastrophic consequences of the Israeli occupation siege and the internal political division, Al-Shawa considered.

Dr. Osama Antar, Friedrich Ebert foundation programs director, said that a simple comparison between the performance of the media in Palestine and Europe, especially in Germany, shows the real effect of media.

Media in Europe and Germany drew information about the pandemic from experts and the Ministry of Health as main source then from politicians, he added. While the scene was topped by the Ministry of Interior in the Gaza Strip and the Prime Minister, Dr. Muhammad Shtayyeh in the West Bank. 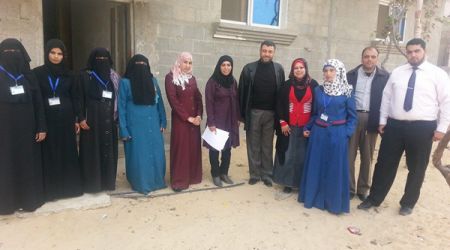